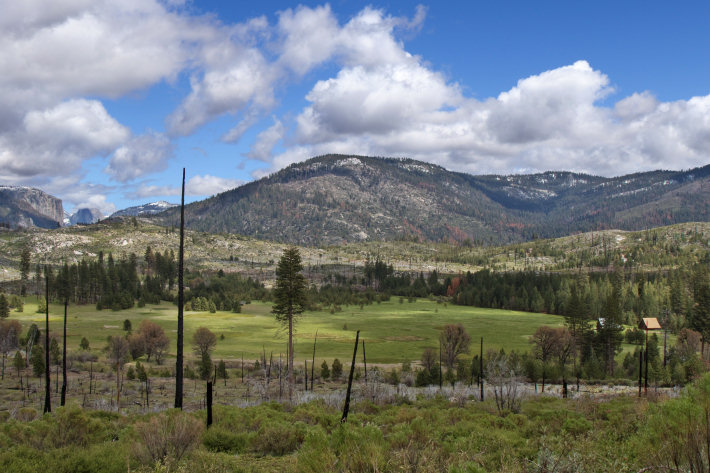 Big Meadow with El Capitan, Half Dome, and Sentinel Dome

The Little Nellie Falls hike starts at the southeast end of Big Meadow - about where the brown tree stands at the far end of the meadow and just to the right of center, from this perspective. (This photo looks roughly east-southeast.) Apart from the falls themselves, this vista is probably the highlight of the trail, with its view of the meadow and, along the horizon at left, El Capitan, Half Dome, and Sentinel Dome. The two barns visible in the south end of the meadow date to the late 19th century and are on the National Register of Historic Places. [1]

The Foresta area has been damaged by fire multiple times in the past few decades, starting with the 17,000-acre A-Rock Fire in 1990, and the evidence is readibly visible here, from the charred trunks in the foreground to the bare slopes on the far side of the meadow. Though the brown ponderosas that you can see in the background - and throughout the High Sierra, unfortunately - are victims of drought and the Western Pine Beetle rather than fire.

If you're reading this on a computer rather than a phone or tablet, you should be able to click on the photo to see a larger version and confirm to your own satisfaction that those little blocks of pixels really are El Capitan and Half Dome.