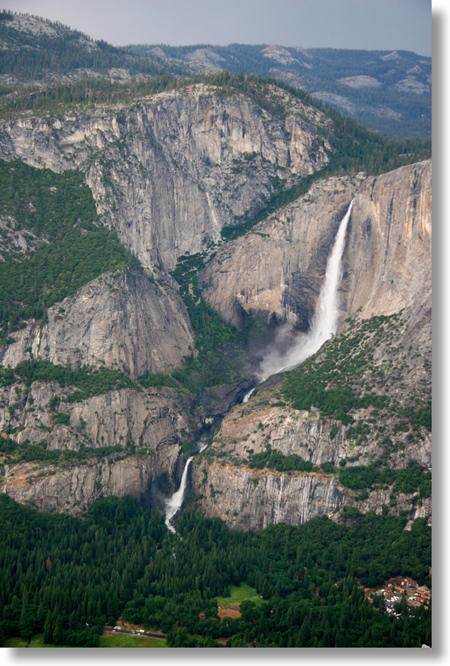 Upper Yosemite Falls Route Overview
Looking up at Yosemite Falls from the valley, it's easy to get the impression that you're about to climb a vertical wall and you'll need to wear a parachute in case you make a misstep anywhere along the way.

As it turns out, though, the trail is steep but not scary. There are sheer dropoffs at the overlooks, which have metal guardrails, and if you wander off-trail at the top of the falls you'll find a few stomach-churning spots, but for the most part, you won't spend this hike wondering whether or not you should have made out a will before you started.

The trail starts off to the left of this photo with a series of switchbacks that carry you to about the elevation of the middle cascades. Then it proceeds horizontally (OK, not really, but relative to the switchbacks you just survived, at any rate) along the second stripe of trees until you round the corner and see the falls for the first time. (Just before the corner, you'll find the fork that takes you to the lower Yosemite Falls overlook, which you shouldn't miss.)

From here, you'll travel parallel to the middle cascades for a short period, then start heading up the ridge between the cliff and the falls -- you can spot some of the switchbacks in the above photo, which was taken from Glacier Point.

The falls will be out of sight for approximately the last mile (1.6 km) of the hike, from about the point where the switchbacks are visible, because of the ridge popping up there. They will be audible, though, and because of the sound bouncing off the cliffside, will sound as if they're located on your left rather than your right, where they actually are.

Once you reach the valley rim, there's a short trail (a few hundred meters) to the spectacular falls overlook, just to the left of where the falls bowl over the rim. If you continue to Yosemite Point, you'll cross the river above the falls and continue three-quarters of a mile (just over a kilometer) to a point offscreen to the right.