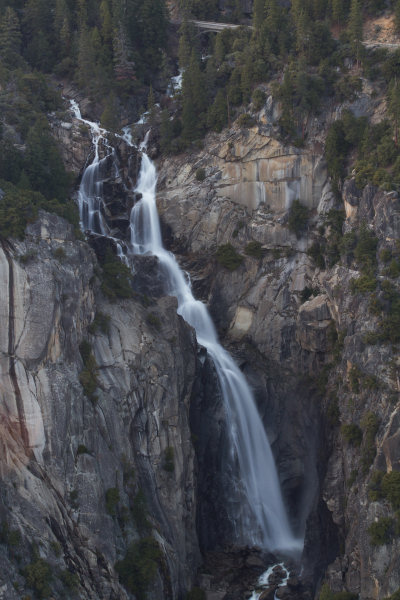 You can see the top two thirds or so of The Cascades by looking north from Turtleback Dome, but the bottom is obscured from most of the dome. It is possible to see the whole waterfall by climbing the large boulder perched on the dome, though that's still not as clear a shot as this view, which is actually from below the dome on the other side of Highway 41. Park at the pullout there and you can walk nearly to the canyon's edge, though the slope descends uncomfortably towards the abyss and you should proceed carefully. There's also a Cascades viewing area at the bottom of the falls along Highway 140; here's a Google Street View panorama (the views are better here if you actually park and get out of your car).

The bridge at the top of the photo is part of the Big Oak Flat Road, which climbs from Yosemite Valley to Crane Flat (the western terminus of the Tioga Road), the Merced Grove trailhead, and the Hetch Hetchy access road.

The Cascades isn't one of Yosemite's better known waterfalls, so here's a bit of remedial cascadia: The Cascades occurs at the confluence of Tamarack and Cascade Creeks, two miles west of Yosemite Valley, and falls a bit over 600 feet (180 meters) starting near the Big Oak Flat Road and finishing just above Highway 140. The map below shows its location along with some other relevant landmarks. From left to right, the red balloons mark The Cascades, Turtleback Dome, the Tunnel View (which delineates, approximately, the western end of Yosemite Valley), and El Capitan.

Like virtually every Yosemite waterfall except Fern Spring, water flow in The Cascades varies widely depending on the season. It looks most impressive during the spring.