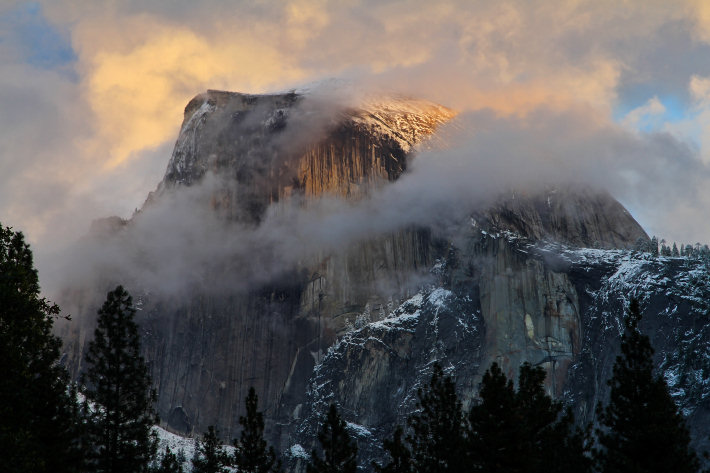 Half Dome is probably Yosemite's most recognizable landmark - it certainly is if the standard is what gets depicted most frequently on the logos of companies with "Yosemite" or "Sierra" in their names or what shows up on Yosemite fridge magnets and other assorted tchotchkes. It's also Yosemite's scariest day hike, requiring a seven-mile trek with 4,500 feet of elevation gain just to reach the base of the cables, where you then face a stretch so steep that you have to hang on to, and pull yourself up by, the aforesaid cables, with fatal dropoffs to either side of you. For all that, it's one of Yosemite's most popular hikes - the only day hike that requires a permit.

Since we're all science geeks here, you'll want to know that "Half Dome" is a misnomer - it's more like "Eighty Percent Dome". Which is even catchier! And it's likely that the lost twenty percent didn't fall off in a single catastrophic event, memorable as that would have been, but rather that it exfoliated away in stages after being undercut by glaciers traversing through Tenaya Canyon, which glaciers then would have carried it away downstream and ground it down. Boulders you see in the Merced River Canyon could be fragments of the former Half Dome, and if you live in the Central Valley in the vicinity of the Merced River, you could conceivably have microscopic bits of Half Dome history in your yard. If you crave more details about Yosemite's geological history, check out Geology Underfoot in Yosemite National Park, by geologists Allen Glazner and Greg Stock, the latter of whom is Yosemite's geologist in residence.

If you're surprised by the shots of the crowds on the Half Dome cables in this video, keep in mind that it was filmed before the permit system was instituted. Also: yes, the Greg Stock who gets interviewed here is the same Greg Stock mentioned in the paragraph above.