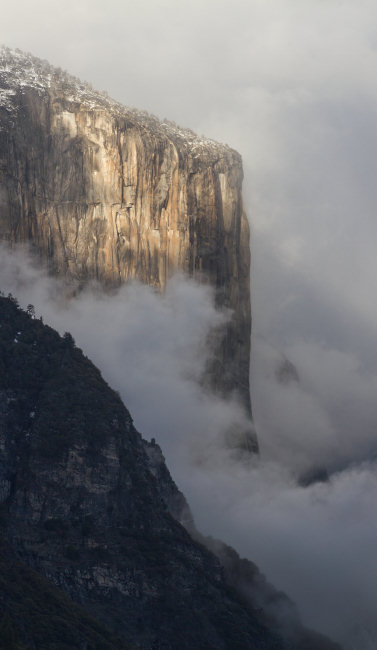 El Capitan is the world's largest granite monolith, 3,000 feet high - three times the height of the Eiffel Tower, more than twice as high as the Empire State Building, taller all by itself than the highest points in 17 different states and dozens of entire nations. You could stack two Rocks of Gibraltar on top of each other on the floor of Yosemite Valley and they still wouldn't reach the top of El Capitan. Also, the top one would slide off.

El Cap is perhaps the most famous and revered rock climb in the world, taking on average two days to complete (though the speed-climbing record is around two and a half hours). It includes a variety of routes, one of which, the Dawn Route, is so difficult that it wasn't successfully free climbed until 2015, in a widely reported effort that took nineteen days to complete. The iconic El Capitan Nose Route is the subject of the first ever "vertical" Google Street View, which allows you to scroll panoramas of various points along the route. Among various unnverving highlights, see looking straight up at Alex Honnold on the first pitch, views across the valley from the Stovelegs section, climbers settled in for the night on El Cap Tower (the route's biggest ledge), and Lynn Hill reaching for a handhold on the Jardine Traverse. El Capitan is so pivotal to climbing history that Camp 4, the nearby campground where El Cap climbers have been hanging out since the late 1940s, is on the National Register of Historic Places (though El Capitan itself, where much of the actual history making took place, is not).

Observers regularly gather in El Capitan Meadow (Street View panorama) to watch the climbers progress, even though you need pricey optical gear to actually be able to see them. One man devotes several days a month to documenting El Cap ascents through his 500 mm and 600 mm telephoto lenses. A frequent sight at the Southside Drive El Cap/Bridalveil viewpoint is drivers with their foreheads practically pressed against their windshields so they can see the top of El Capitan. Do the trees in this photo look distant and tiny? The ridge they're on is actually more than a mile closer to the camera than El Capitan is.

From The Tunnel View