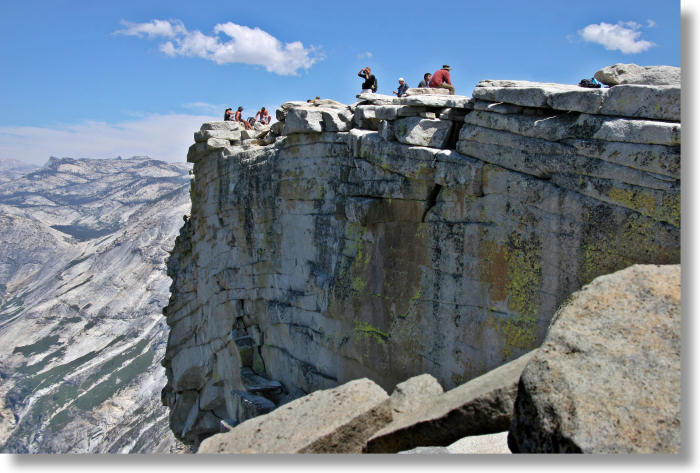 Half Dome's Highest Point
Look around the top of Half Dome and it'll soon be clear that the afraid-of-heights crowd got weeded out well below the summit. You're likely to find people playing frisbee, poking their heads over the abyss to see the valley far, far, below, or, like these hikers, casually applying suntan lotion while they're reclining on ganite slabs perched fairly precariously above a 4,800 foot (1,600 meter) drop.
It's hard to put 4,800 feet into comprehensible terms. Have you been to the top of the Empire State Building? Half Dome's dropoff is four times higher. Think Taft Point was impressive? Half Dome's dropoff is a thousand feet more. Been to the Grand Canyon? Half Dome's dropoff is so much higher that - well, actually, the Grand Canyon's north rim has a deeper dropoff, by around eight hundred feet. So the north rim (but not the south rim, which is lower) wins this round. On the other hand, the Grand Canyon is, on average, about 10 miles wide, with a comparatively gentle slope that would require a series of Wile E. Coyote bounces to reach the bottom, while a plunge over the north face of Half Dome would get you down in a far more direct fashion. You could, in fact, fall the first thousand feet without suffering any injuries at all. 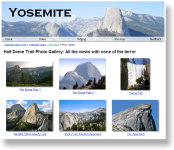