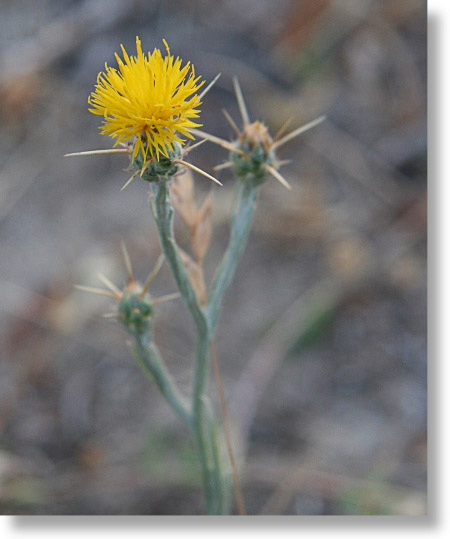 Yellow Star Thistle is one of the great scourges of the Yosemite area. It's an invasive plant that spreads rapidly & crowds out native flora, causes a fatal nervous system disease in horses, and is open to criminal schemes of any variety. It's a sort of king-of-the-undead creature that responds to mowing by regrowing and then flowering just below the mowing line. Never turn your back on Yellow Star Thistle. If you find it inside Yosemite, call the White House red phone immediately.

Size:  If cut, it'll regrow and bloom with a single stem only a few inches off the ground, but left to choose its own program, it'll grow into a bush a few feet square.

Habitat:  Dry & sunny is its metier. It's primarily a foothill flower, but can reach the lower elevations inside Yosemite.

Centaurea solstitialis etymology:  Centaurea derives from the Latin word for centaur, a half man/half horse creature from Greek mythology, and probably refers in particular to Chiron, a centaur famed for his knowledge of the medicinal uses of plants. Solstitialis is a Latin adjective meaning "of the summer solstice," which is about when Yellow Star Thistle tends to start blooming.

This Photo:  Above the Fresno River north of Oakhurst, mid July