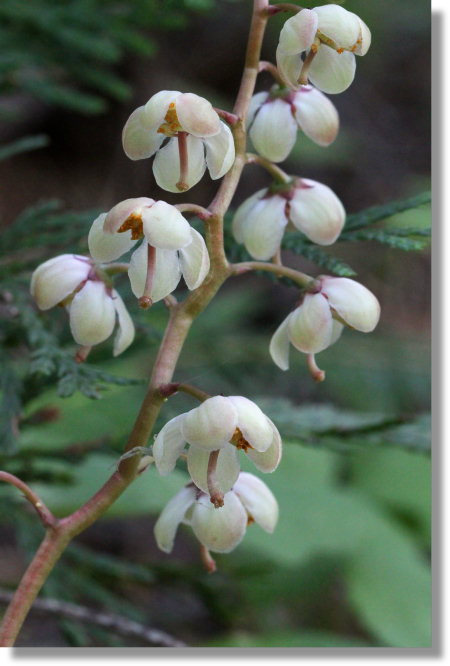 White-Veined Wintergreen grows throughout the western U.S. and Canada and is considered the most common wintergreen in Yosemite, but I haven't often encountered it myself, probably because it prefers to grow in dark, heavily shaded areas. These photos, true to form, are from a well-shaded area near the Wawona Meadow trail.

The leaves, which feature light veins against a dark green background, are equally as striking as the flowers, but have also launched a controversy in the taxonomical community: some Pyrola pictas don't have leaves at all, nourishing themselves through symbiotic relationships with underground fungi (your friends probably call this mycotrophy), and there is ongoing debate over whether these are actually an entirely separate species. The Forest Service has more details on the matter.

Pyrola picta etymology:  Pyrola is a Latin concoction meaning "little pear" (from pirum, pear, plus the diminutive -ola), a reference to the shape of the leaves. Picta is a Latin adjective meaning painted or decorated, again referring to the plant's distinctive leaves. [1] [2] [3]

These Photos:  Along the Wawona Meadow loop trail, late June