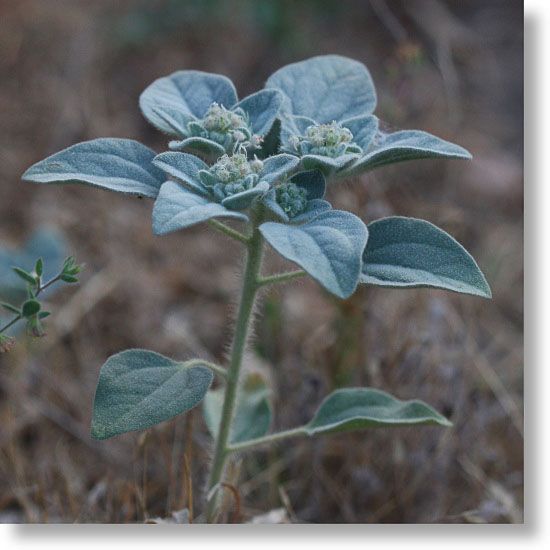 Turkey Mullein tends to spread out into a bluish-green matlike plant that's wider than it is tall; it rarely gets more than a foot high but can grow up to three feet across.

For years Turkey Mullein was the only member of the Eremocarpus genus, but now it's been reassigned to Croton, so it finally has some relatives to visit for the holidays. The Eremocarpus genus itself is not so lucky, though; now empty, it's eagerly looking for applicants to join so it doesn't get forgotten altogether. If you're not happy in Homo sapiens and think you might enjoy being a member of a genus whose name comes from Greek words meaning "solitary fruit," send photos and a DNA sample to the Jepson Flora Project. Or just add a Wikipedia entry for yourself; either should work.

Range:  It's primarily a foothill flower, but may show up in a few spots at the lower elevations inside Yosemite.

Croton setigerus etymology:  Croton is from the Greek word kroton, meaning castor-oil plant. Setigerus is from the Latin word setiger, meaning "bristly," and refers to the plant's furry leaves.

This Photo:  Above the Fresno River near Oakhurst, late July 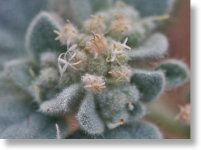