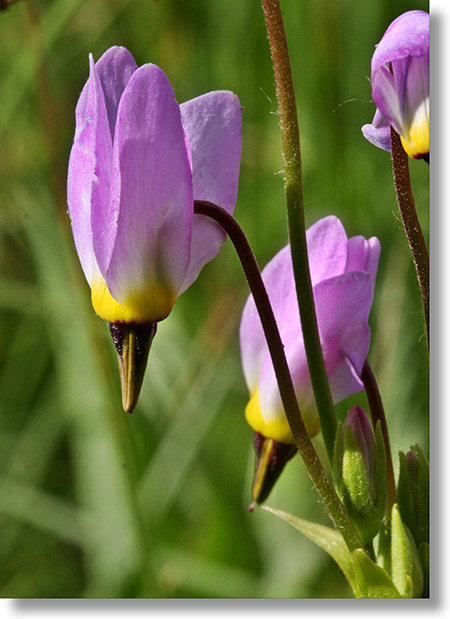 If you round the corner of a trail to a see a meadow in front of you, and the meadow is such a vibrant pink that you have to dig out your welding goggles, chances are you've stumbled onto a colony of Shooting Star, one of the leading contributors to Yosemite meadow-beautification campaigns. Concentrated blooms of Shooting Star or its higher-elevation relative, Alpine Shooting Star (Primula tetrandra, formerly Dodecatheon alpinum), create eye-popping vistas that can make even otherwise pedestrian hikes like Lukens Lake memorable.

Primula jeffreyi etymology:  Primula is derived from the Latin term primus (first) because of its early blooming tendencies.[1] Jeffreyi is a tribute to John Jeffrey (1826 - 1854?), a Scottish botanist who spent four years exploring the American west and discovered several new plant species, including this one and the Jeffrey Pine, before disappearing in 1854.