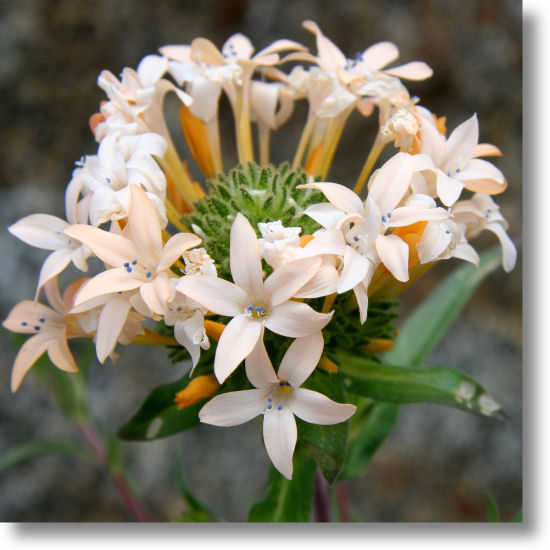 Large-Flowered Collomia flowers stand out for their unusual color, which necessitated the addition of "peach" to the "pink & peach flowers" category. Combined with the orange buds and blue anthers (the ends of the stamens sticking out of the flower's center), Collomia grandiflora is a color scheme just begging to be ripped off by avant-garde decorators.

Large-Flowered Collomia is common in Yosemite and grows throughout California and in various locales elsewhere in the western US and Canada. I've seen it in several places along Highway 41 between Yosemite Valley and Oakhurst.

Collomia grandiflora etymology:  Collomia derives from the ancient Greek word kolla, meaning "glue," referring to the genus's sticky seeds. Grandiflora is a combination of the Latin words grandis, meaning full-grown or large, and flos, meaning flower; the two combine to mean (wait for it) large-flowered. Which Collomia grandiflora is not, as it turns out. But the many small flowers do combine to form a single large head of flowers, so no harm done.

This Photo: Along highway 41 south of Fish Camp, early June