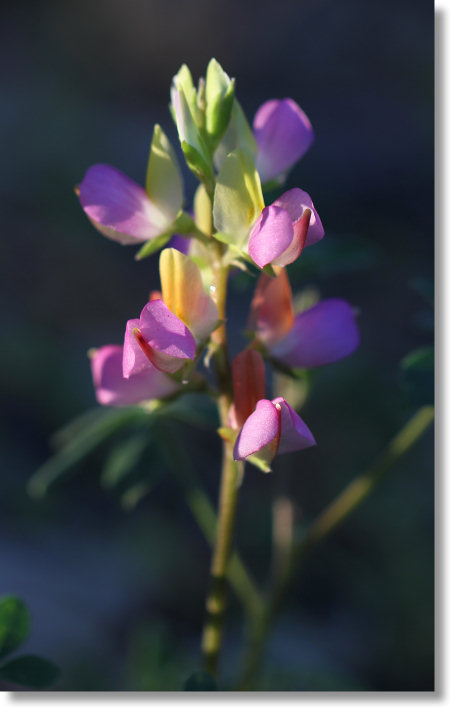 Habitat:  Harlequin Lupine is the most colorful of the gazillion and one varieties (an unofficial estimate that's probably low) of lupine that grow in and around Yosemite. It's at home in open areas from the foothills up to about 6,000 feet.

Size:  The plant gets up to 20 inches high, but is generally shorter at higher elevations. The flower clumps are 2 - 3 inches across, though the individual flowers are much smaller. At the high end of their elevation range, they tend to be compact lupinettes with just a single row of flowers.

Lupinus stiversii etymology:  Lupinus is a Latin term that means "wolf-like," applied here for reasons that are not immediately obvious. There are no modern accounts of lupine hunting in packs, howling, or turning into people when the moon isn't full; nor are there legends of wolves sprouting pink or blue flowers and providing nectar for wandering insects. Not that any broad-minded person would necessarily be opposed to this. At least two theories attempt to account for what engendered the outwardly incongruous connection between lupines and wolves. The simpler of the two is that since lupine are poisonous, both wolves and lupine kill livestock.[1] While admirably straightforward, this explanation could be applied to lots of different plants, and one wonders how just the lupines got stuck with this sobriquet. The second theory, which is more lupine-specific and takes an even dimmer view of wolves, posits that lupines were known to grow in poor soil and hence must have been stealing nutrients from all the other, presumably non-poisonous, plants that would have more preferably been growing where lupines did.[2] Here the wolves move into rather more apocalyptic territory, not just absconding with livestock but devouring all life around them. Which seems over the top, but then, if you were a one-cow subsistence farmer and the loss of that cow could lead to your family starving, you too might have an unremittingly grim outlook towards wolfpacks malingering in the woods beyond your fields.

In any event, the theory that lupines steal nutrients, while possibly responsible for the wolf connection, turns out to be the opposite of reality. Lupines are found in poor soils not because they make them poor, but because they establish a symbiotic relationship with rhizobia, bacteria that fix nitrogen for the lupines in exchange for other nutrients. When the lupines die, they release nitrogen, typically 'fixed' as ammonia, enabling other plants to grow in the soil that they've sacrificed themselves to nourish. Which is even harder to work up into a useful wolf metaphor, but feel free to give it your best shot.

Stiversii, at least, is uncontroversial. It's a tribute to Charles Austin Stivers, an Army physician who collected specimens of the flower in the Yosemite area in 1862.[3] 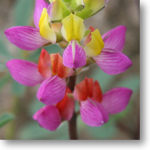 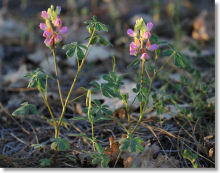