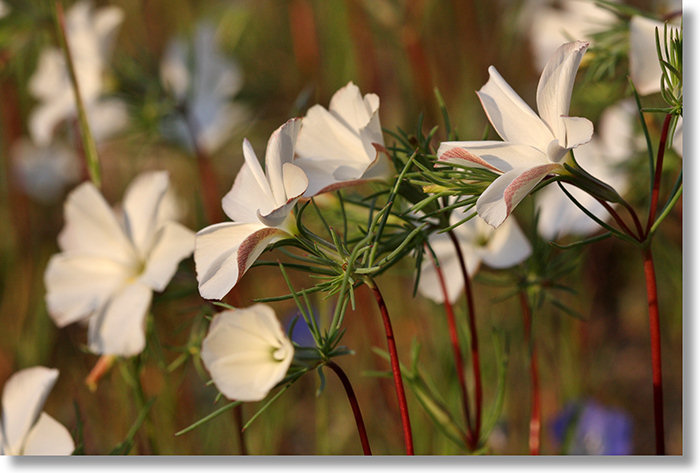 It's easy to miss Evening Snow, a notorious night owl, in the daytime, when it's curled up in repose and blends in with the landscape. Around sunset, though, it unfurls its petals and turns entire hillsides white - an effect that's multiplied because it tends to grow in vast colonies in serpentine soils where other plants can't compete with it. It grows mostly in the foothills, but also shows up in a few spots in Yosemite's lower elevations; I've seen it blooming along the Wawona Meadow trail.

Linanthus dichotomus etymology:  Linanthus derives from linum, the Latin word for flax, and anthos, the ancient Greek word for flower. Dichotomus, which means "dividing or branching into pairs" in botanical circles, derives from Latin and Greek terms meaning "cut in half." 1

This Photo:  Above the Fresno River near Oakhurst, late April. If you like this photo, you can use it as your desktop wallpaper - see the Yosemite Wallpapers page for larger versions.