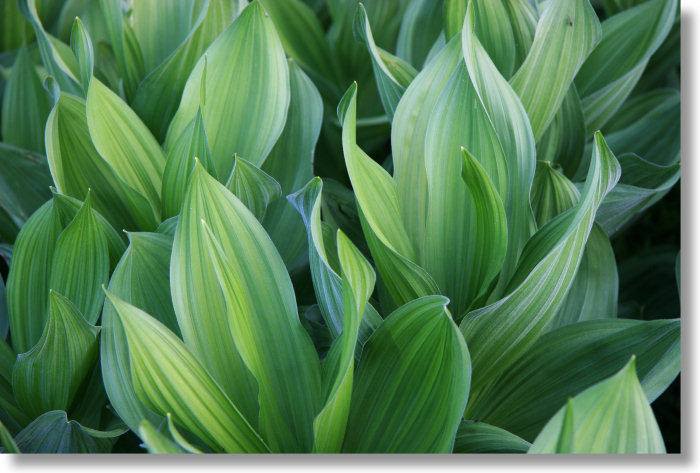 Corn Lily may be the first flower since Lili Von Shtupp to be best known for something other than its corollas. Though Corn Lilies grow flower clusters on six-foot-high stalks, it's the football-sized leaves that tend to draw the attention of photographers, especially when several plants gather in a tight bunch. From well-known professionals like G. Dan Mitchell and William Neill (see a larger version) to people I just found on Flickr, everyone seems to be taking gorgeous pictures of Corn Lily leaves. To get your own, you need to find the plants before the middle of July, when the stalks start sproinging above the leaves.

Where to Find Corn Lilies:  Moist, open areas above 5,000 feet. It doesn't grow in Yosemite Valley, but it's common along the Glacier Point and Tioga Roads. If you're hiking a trail departing from there and it passes through meadows, chances are good that you'll be in the vicinity of Corn Lilies.

Veratrum californicum etymology:  Veratrum is the Latin word for the hellebore genus, of which Veratrum californicum is not a member. It is, like hellebores, poisonous, though; the ARS provides a grim but handy list of symptoms. The short version: don't bring any pregnant sheep to Yosemite. Actually, this would be sound advice even if you planned to avoid Corn Lilies altogether.

This Photo:  Along the Lukens Lake trail, early July. You can download various larger sizes to use as your desktop wallpaper. 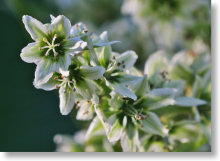