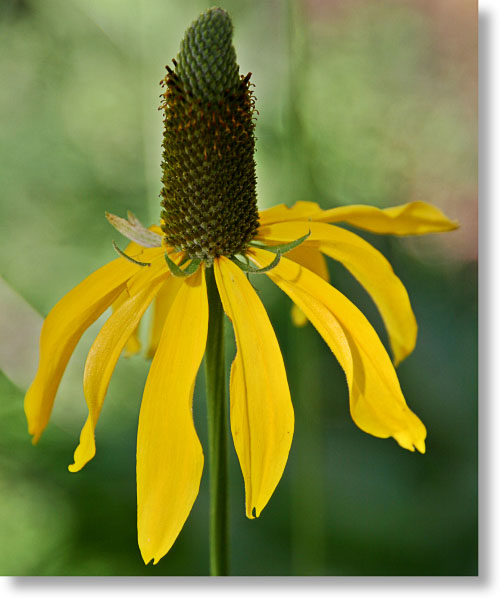 The flowers of the California Coneflower are large and easy to spot. The cones alone can reach three inches in height, with the petals drooping another three inches or so downward, and the plant as a whole can reach four feet high. There are large stands of it pretty much every summer in the Crane Flat area (the western terminus of the Tioga Road); if they're blooming, you'll likely notice the flowers from your car even if you're inadvertently overshooting the posted 25 MPH speed limit.

Rudbeckia californica etymology:  The Rudbeckia genus is named for father-and-son botanists and professors of medicine at Sweden's Uppsala University, Olaus J. Rudbeck (1630 - 1702) and Olaus O. Rudbeckius (1660 - 1740). Olof the Younger was a teacher of renowned botanist Carl Linnaeus (1707 - 78), who ultimately named the genus for them. The Nobel family (of Nobel Prize fame) descends from the elder Rudbeck.

Californica, as your innate gift for understanding Latin has probably led you to deduce, refers to California, the state where California Coneflower does the bulk of its growing (it also extends a bit into southern Oregon). The word California has an interesting provenance of its own involving gold-clad lady warriors, pagan queens, and trained battle griffins.

This Photo:  Next to the gas station at Crane Flat (the western endpoint of the Tioga Road), mid July