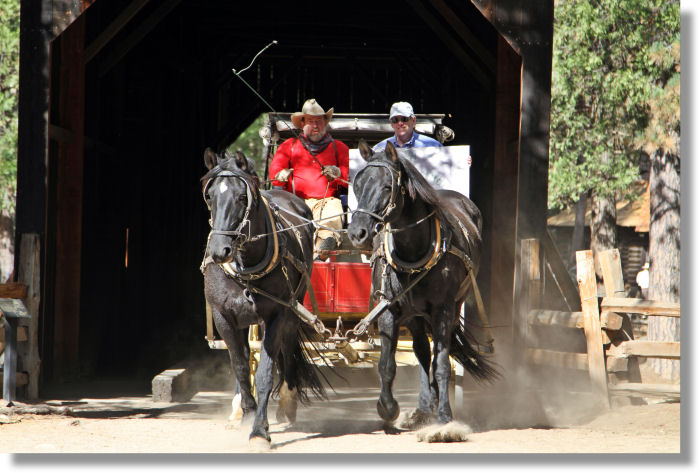 The Wawona Covered Bridge at the Pioneer History Center

Around the corner from the Wawona Hotel is the Pioneer History Center, a collection of historic buildings from throughout the park, among them a blacksmith shop, a hundred-year-old Wells Fargo building, and the valley's old jail. The covered bridge (above), built in the 19th century, is in its original location; most of the others have been collected from other parts of Yosemite to keep it company. Going to Yosemite to look at buildings is like going to the Louvre to use the bathroom, but if you're already stopping here for other reasons - the Pioneer Center is across the road from a picnic area, general store, bathrooms, and one of Yosemite's three gas stations - it's worth popping over to have a look around. Besides the venerable buildings, there's also a colorful assortment of restored wagons and stagecoaches here.

Admission is free; you can theoretically1 save fifty cents - enough for nearly a tenth of a gallon of gas at El Portal! - by downloading the park service's PDF brochure, which covers the histories of the center's buildings. For a history of the history center itself, see this account of the Pioneer Center's creation, written by project leader Doug Hubbard, which includes the startling revelation that one of the first steps in the restoration of the 19th-century covered bridge was dynamiting the shakes off the roof.

1 I've never actually noticed these for sale, so you really won't save any money whatsoever. But you've probably already saved a buck and a half by not being able to get a Half Dome permit this year, so you're still ahead.