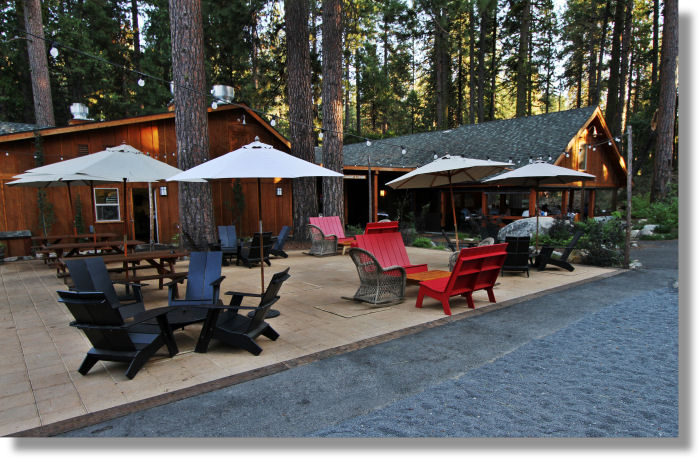 The Evergreen Lodge, a mile and a half outside the park's Hetchy Hetchy entrance and eight miles from the Big Oak Flat entrance, is one of the premier resorts along the Highway 120 corridor, with nearly a hundred cabins and a far better restaurant than you'd expect to find in such a remote spot, plus a tavern, convenience store, and various public buildings surrounding a central courtyard. The lodge coordinates (at extra cost) a variety of guided tours and activities for guests, including hiking, whitewater rafting, fly fishing, snowshoeing, bicycling, and photography workshops, and provides massages and yoga sessions. If you forgot to throw a mountain bike into your suitcase, you can rent one here, along with GPS units, snowshoes, and strollers. Ten dollars apiece gets summer guests day-use passes for nearby (half a mile away) Camp Mather, which has a swimming pool, beach volleyball court, tennis courts, and a small lake.

For all its careful attention to the sorts of things people might be willing to pay for, the Evergreen wasn't always a welcome oasis. It began in darkness, as housing for workers building the O'Shaughnessy Dam, which flooded the Hetch Hetchy Valley and broke the heart of John Muir (he described the pre-flood valley as a twin to Yosemite Valley and spent the end of his life fighting to prevent the dam's construction). The dam still stands today, mocking the environmental pretensions of San Francisco, whose government claims that a valley in a national park should remain dammed because it would be expensive to store the water elsewhere, and whose citizens seem little inclined to protest otherwise.

So it might be karmic payback that accounts for the Evergreen's uneven fortunes after the dam was completed. The lodge went through several owners and a variety of peaks and valleys during the 20th century, serving not only as an inn, but as a brothel and moonshine distillery at sundry points. It wasn't until 2001, when the current ownership took over and greatly expanded the property, that it began to be known as one of the Yosemite area's upper-tier resorts.

Although a few of the earlier cabins remain (see the 'vintage cabins' in the table below), nearly all the cabins at the lodge were built by the latest owners. All cabin styles are generally well appointed - click on the cabin names in the table to visit the lodge's site, which includes multiple photos of each variety of cabin - and include refrigerators, but they don't have kitchens or barbecues; if you're determined to cook, your only option is the 2,500-square-foot John Muir House, which goes for up to a thousand dollars a night.

In addition to the cabins, the lodge also has 15 tent sites. The sites come with tents and bedding already installed, unlike traditional campgrounds, where wandering into a tent you don't own is sure to lead to trouble. The tents come in 2- and 4-person varieties and include bonus camp chairs, but, as you'd probably already assumed, don't have electricity, heat, or bathrooms. There are community bathrooms and showers near the tent area. The tent sites don't have individual fire pits, but they overlook a common area holding several picnic tables and a few first-come, first-served fire pits.

The Evergreen's proximity to Camp Mather is not just significant for day-use passes, but also makes it the handiest lodging option for fans attending the Strawberry Music Festival, which takes place at Camp Mather over Memorial and Labor Day weekends. The lodge recommends booking three months ahead for the festival.