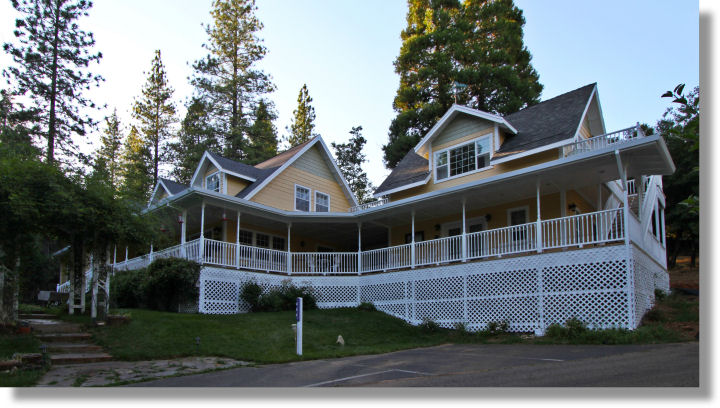 The inn dates from 1992 but has been greatly expanded by current owners Steve McCorkle and Alexandra North, who added a wing to the original building (on the right in the above photo) and built the Ahwahnee Suites, a five-bedroom addition that opened in 2013. They bought the property in 2008 but are both long familiar with the area; Steve, in fact, originally arrived in Yosemite in the 1970s to strap on a movie camera and pilot hang gliders off Glacier Point, gathering footage for a nature film that, unfortunately, ran out of funding before it could reach theaters and induce cold sweats in the world's acrophobes.

The inn doesn't allow guest pets, but thoughtfully provides its own - hundreds of hummingbirds converge on the property during the summer, consuming fifty pounds of sugar a month, and you might see a dozen at a time buzzing the row of feeders on the front porch. In addition, Alexandra has seeded the adjoining pasture with Arabian horses, which she raises and trains; one of them is a former national endurance champion. (Guests aren't allowed to ride the horses - or the hummingbirds, either, for that matter - for safety reasons.)

Nine of the inn's ten rooms include king-sized featherbeds, and all the rooms have private baths (see the inn's room photos & descriptions). The Brameberry Room, on the bottom floor of the western building, is ADA-compliant. The inn operates at near capacity in the summer (read TripAdvisor's largely glowing reviews to get an idea why), and prospective guests are advised to get reservations well ahead of time. For winter guests, the innkeepers provide tire chains in a variety of sizes and snowshoes for use on Yosemite treks (installing the chains, regrettably, will be up to you). Room fees include a two-course breakfast and complementary fruit, beverages, and chocolate chip cookies.