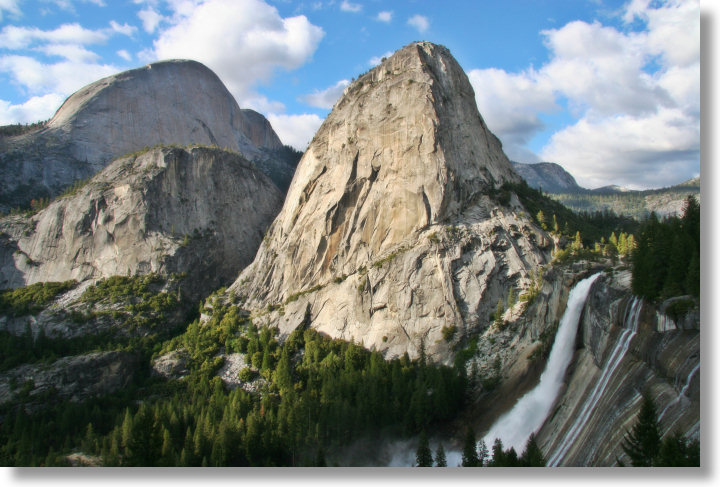 Nevada Fall is the upper of the two waterfalls on the lower part of the Panorama Trail (this section is also known as the Mist Trail). The trail proceeds down the mountain in a series of switchbacks left of the waterfall, against the shoulder of Liberty Cap. There's also an overlook at the cliff's edge, just to the left of the waterfall, that's nearly as unnerving as Taft Point. Though it doesn't expose as high a dropoff as Taft Point does, the overlook compensates by not being level - it slopes downhill, towards the abyss, propelling you into the guardrails. When you're there, don't forget that the guardrails you're leaning against are utterly exposed to harsh weather and mammals with sharp teeth, and you don't know when a proper engineer was last brought in to check their structural integrity. Anything could happen. That's why you should never hike alone - bringing a friend to test the railings before you try them yourself can save you lots of unnecessary pain and death. If you're an extra careful hiker, also bring a second friend who looks more appetizing to mountain lions than you do. Any of your friends who are bluefin tuna will serve admirably.