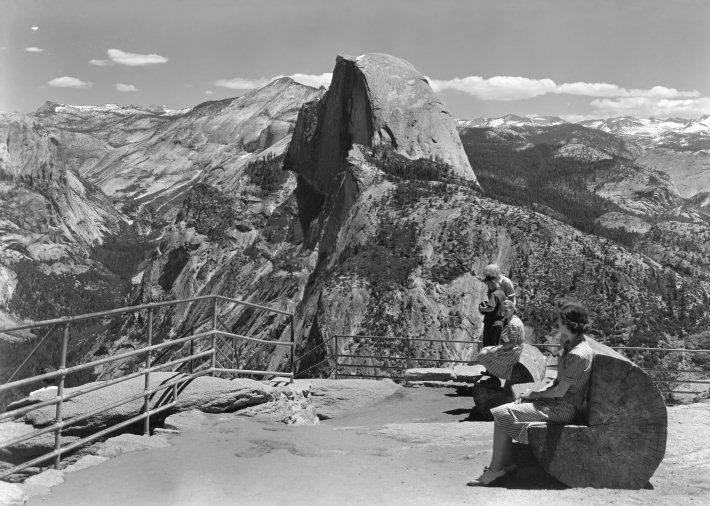 The NPS archives list the date for this photo as 14773, which undoubtedly means something important, though it's difficult to say precisely what. Possibly it's the number of days since January 1, 1900, a common base for spreadsheet dates, and some formatting was lost in translation from spreadsheet to CDN. If that's the case, this photo was taken on June 11, 1940, which is feasible given the dates of the photographer's other Glacier Point photos. The iron guardrails and log benches predate the 1997 remodel, I'm pretty sure; meanwhile, the evidence of glaciation in Tenaya Canyon & more or less contemporary shapes of the surrounding peaks indicate that the photo is less than five million years old. 1940 fits neatly into this window, so we'll go with it. If these sightseers had checked their newspapers that morning, they would have found much grim news from an eventful day of the war in Europe: Norway had surrendered to Germany, Italy had declared war on France and England, and the French government had fled Paris (the Nazis would occupy Paris on the 14th). Perhaps it's best to give the news a miss when you're in Yosemite.

Readers raised on Where's Wallace or the more recent books that pay homage to it have probably already noticed that there actually five people in this photo, but I spent a long time looking at it before I noticed the patch of snow that turned out to be the shoulders of #5's dress. Here's a larger version of the photo in case you need a closer look.